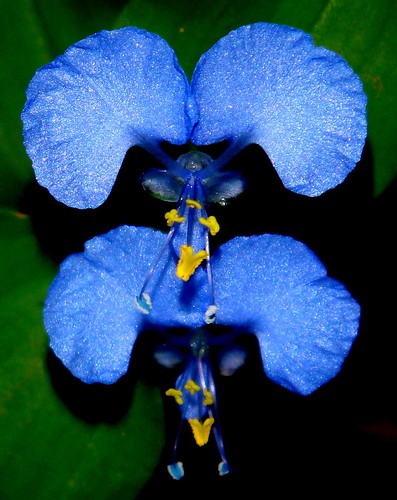 Commelina benghalensis, with many other names like Tropical spiderwort, Benghal dayflower, Bloselblommetjie in Afrikaans, and sometimes, wonderfully, Hairy honohono. It’s found all over the world in semi-tropical areas but originates from Asia and Africa.
This particular specimen – nicely twinned – was photographed by flash in the shadier realms of the beautifully extravagant Botanical Garden of the Stellenbosch University in South Africa. As it was developed in 1922, the grounds were thoroughly reworked. As usual in cases like this, the edges of the garden were disturbed areas to which relatively little attention was given; they were thus especially conducive to the Commelina. The dark green, luscious leaves make for nice ground cover in the semi-darkness of the shade, with little flashing points of bright blue punctuated with yellow. Seen in situ, it is clear that they can easily spread and become a pest. This has happened, for example, in Georgia (where they have invaded cotton fields), in California (orange groves), and in Brazil (in the state of Sao Paulo, these pretty flowers are a problem in eucalyptus groves). Not without reason they are on the (US) Federal Noxious Weed List.
But the plant has its uses, too. In China it is employed as a diuretic and against various inflammations; in Pakistan as a laxative and in dermatology; and in South Africa to combat infertility in women. In some countries it is also eaten as a vegetable (I guess the leaves, not the flowers…).
The plant was first named Commelina by Carolus Linnaeus in 1753, after members of the Commelin (more properly in Dutch: Commelijn) family. Jan Commelin (1629-1692) was a famous professor of botany associated closely with the botanical garden at Amsterdam, which was in fact at first a Hortus Medicus. He grew immensely wealthy from his development and selling of herbs and drugs. (Incidentally, his brother Caspar was an early newspaper magnate.) Their nephew Caspar (1667-1734) continued his uncle’s work, editing and publishing several of the former’s catalogues and descriptions of plants from Asia and Africa. Caspar himself was apparently especially interested in South African succulents (which connects him nicely across the centuries to the founders of the Stellenbosch garden who were modern experts on succulents and lithops). There are some unclear romantic stories of how Linnaeus came exactly to use their family name for this pretty plant… but an elaboration would take up too much space here.
The pictured flowers are about an inch wide.