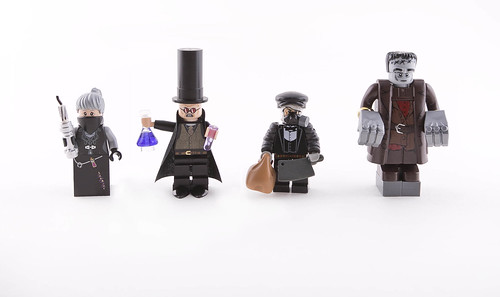 It is the Age of Steam…

Deep in the darkest depths of Yorkshire lives Dr Frankenstein.
He resides in a luxurious country mansion where he masquerades as a respectable medical practitioner. When night falls however, he spends most of his time doing experiments on cadavers, perfecting their reanimation.

Victor trained formally as a practioner of medicine and then later on as coroner. His interest in science and particularly in the research of the cycle of life and death, resulted him becoming some what of an introvert. Spending more and more time in his lab and less and less time seeing patients, The Doctor became renowned for his ability to perform complicated and often life saving surgery with the greatest of ease. So much so that the villagers who lived nearby turn a blind eye to some of his more obvious eccentricities. Indeed such was his familiarity with the inner workings of the human body he was able to accrue a vast fortune from selling anatomical guides and operational procedures to the wider medical community.

The Doctor’s faithful manservant. A "fellow" recruited from the scrapheap of broken men back from the war with Muscovy, he travels the countryside looking for organ or limb donors who want to assist the Good Doctor with his experiments. It’s most unfortunate that at times, the people donating the organs still need them ( It’s all in the name of science you understand)…

Dr Frankensteins’ greatest achievement is the reconstruction and reanimation of his dearly departed brother Adam. Killed in the war with Muscovy, his internal organs have been replaced with clockwork pumps and machinations. Fitting all those parts into Adam’s wretched and mutilated body proved to difficult so using a patchwork of donor parts and a reinforced extemded brass skeleton the monster was born. Frankenstein believes Adam’s consciousness is still locked away inside the monsters brain, but as of yet his experiments to restore his brothers identity have proved futile.

Madam Auderville is the only servant who has remained loyal to the doctor upon finding out his true nature. This is most probably why she is still alive and the rest have ended up on the mortuary slab. she takes good care of the Mansion and ensures at least outwardly that the place appears normal and without cobwebs (much to Mr Igor’s disdain).

Photo by Gmanvespa as always!